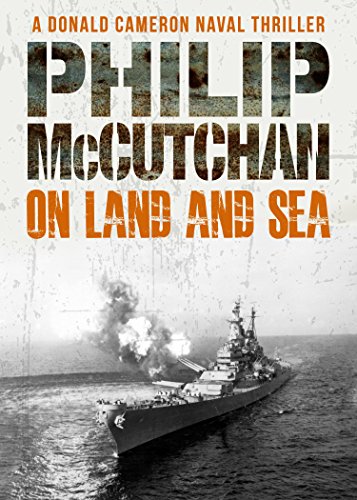 "A nautical war buffs feast...[McCutchan] keeps an authoritative hand on the wheel and his descriptions of battles at sea ring with laconic truth." — The New York Times Book Review

In this action-packed nautical thriller set during World War II, Lieutenant-Commander Cameron finds himself out of his element and undertaking a dangerous mission in neutral waters.

During the height of World War II and just returned from naval adventures in the South Atlantic, Lieutenant-Commander Cameron is given fresh draft orders to report to the mysterious “Mr Cambridge”.

Despite his protestations that he’s “no cloak-and-dagger man, sir”, Cameron is sent on a dangerous mission to ‘cut out’ a German vessel from a neutral port.

Flown to Gibraltar, Cameron must travel, disguised as a Spanish workman, to the frontier town of La Linea, where he is to meet a British agent.

The plan is to infiltrate the Kaiserhof, a ship of crucial technological importance, capable of wreaking havoc on the allied naval defenses. Once infilitrated, Cameron’s mission is to take the ship intact to England.

All seems to go to plan, as Cameron and his team of seamen make their trek to the port of Cadiz, until Mr Cambridge turns up unexpectedly.

Cameron and his hand-picked party of seamen are determined to take over control of the Kaiserhof and steal Herr Hitler’s prize from right under his nose.

But will the commander be able to cut through the intrigue and carry out his mission succesfully? Will he be able to pilot the Kaiserhof through storm, treachery and enemy waters to safe harbor?

On Land and Sea is a gripping and atmospheric nautical adventure, a World War II espionage story, told by an author with a lifetime of experience, both in storytelling and the British Navy. It was originally called Cameron and the Kaiserhof.

"A nautical war buffs feast...[McCutchan] keeps an authoritative hand on the wheel and his descriptions of battles at sea ring with laconic truth." — The New York Times Book Review

"A most exciting successor to his first novel — and it is just as rugged." — The Times , Hamilton, New Zealand

Philip McCutchan (1920-1996) grew up in the naval atmosphere of Portsmouth Dockyard and developed a lifetime's interest in the sea. Military history was an early interest resulting in several fiction books, from amongst his large output, about the British Army and its campaigns, especially in the last 150 years. He served at sea in the British Royal Navy throughout World War II, spending time on everything from destroyers to battleships to aircraft carriers. He is an extremely prolific author, having written over 100 books in his lifetime.